Of Markets and Midterms  – how elections, trade, taxes, and immigration affect your investments

The important part of the 2018 midterms has come to a close, and markets are trading up following the election results. The Republicans maintain a slight majority in the senate, while Democrats gained majority in the house, but what does this mean for the markets? 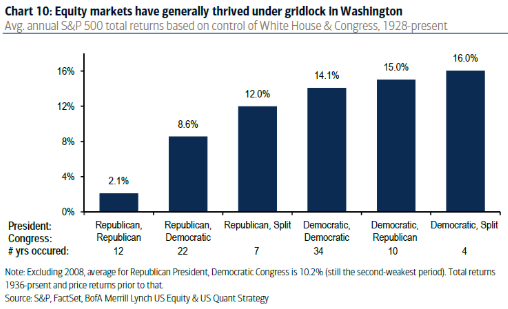 In past years, the markets have done very well with a Republican president and a divided Congress, with the S&P 500 averaging 12% growth annually. If the Democratic Party had taken both the senate and the house, the past data predicts only 8.6% annual growth. The worst historical returns occur when Republicans dominate both the presidency and Congress, averaging only 2.1%. The result of these midterms was the best possible case for the markets, and investors are feeling bullish.

Despite a solid political base, investors are still worried about trade.  While a democratic house will hamper President Trump’s domestic goals, both Democrats and Republicans support a more stringent policy surrounding China trade. Trump also enjoys executive power in international dealings, meaning he can set trade terms regardless of Congress composition. According to Steven Okun of McLarty Associates, ‘It’s going to be the same, if not worse, in terms of U.S.-China trade”. Trade disputes have already damaged market returns. In June, the Dow fell for 9 sessions of 10 as the U.S and China slapped tariffs on each other. Evidence shows that further tariffs and trade tension will continue to harm the stock market. Investors are becoming more apprehensive as the danger of an all-out trade war looms closer.

Investors are also concerned about taxes. After high market growth and record stock repurchases by corporations following the Trump tax bill in January, investors would love to see further tax reductions. Trump teased further tax breaks for the middle class in the weeks before the midterm elections, and investors are waiting to separate actual legislation from election hype. Trump named Kevin Brady (Republican Rep in the House) and Paul Ryan (House Speaker) as the authorities on the new tax cut, which is set to arrive “prior to November”. If the tax cuts are implemented, analysts are expecting a general market rise, but caution investors on the possible dangers of the trillion-dollar deficit already accrued in 2018. Despite winning the House, Democrats will not be in a position to repeal the established tax cuts until after the 2020 presidential election. That said, a blue House will most likely slow or halt any new tax cut legislation.

Immigration is both a blessing and a curse in the markets. Simply put, the United States’ ability to import human capital for free is probably our greatest advantage in the global economy. Job opportunities across a wide range of skill levels attract thousands of legal immigrants every year, and the U.S. gains the public benefit of that migrant work. Despite the benefits of immigration, President Trump ran on the “Build the Wall” campaign throughout his entire path to presidency, turning voters who felt they had been disenfranchised by the current immigrant legislation. With Trump in office, immigration discussion has had less-than-savory effects on US stock markets, pressuring companies that capitalize on immigrant labor (specifically agriculture and manufacturing). President Trump credits his political agenda for the stock market success in 2018, but economists widely agree that tariffs and limitations on legal immigration are negatively affecting the markets. Noah Smith of Bloomberg Opinion says large recessions, including the Great Depression, can be attributed to limiting immigration (in conjunction with other factors). He quotes the Johnson-Reed Act of 1924, which “severely curtailed immigration”, as well as the general backlash against immigration in the mid to late 1920’s.  According to the 2016 paper by economists Philipp Ager and Casper Hansen, limiting immigration “reduces populations, leads to negative agglomeration*  and pushes native workers into low-wage occupations”. Overall, changing immigration laws will worry the already jumpy investor base, and may lend a match to the selling bonfire.

*Agglomeration refers to the beneficial affects of businesses, suppliers, and customers being grouped in close quarters, such as in a dense city.

To sum up, the midterms are a great benefit to your stock portfolio in the short run. Investors are excited, and stocks have historically done well in this political environment. The current benefits of Trump tax cuts are here to stay, but new tax cuts most likely won’t happen during congressional gridlock. Immigration legislation will affect stocks if visa numbers are cut, but an investor can circumvent this pressure by buying less immigrant-dependent sectors. The most worrisome aspect of U.S. politics is trade. With a possible trade war just around the corner, the markets will remain volatile until these disputes are resolved.

Are you prepared to retire when you want to?

Wondering when you can retire?

Pacific Investment Research is a boutique investment advisory firm that provides financial planning and investment management services to investors throughout California.  We have more than 25 years of experience helping individuals and couples accumulate and preserve the assets they need for a secure financial future.  As fee-only fiduciaries, we put our clients' best interests first.

Paladin Certified
This advisor or firm is a vetted, documented member of the Paladin Registry.

Certified is Paladin’s highest level of due diligence for financial advisors and firms. Paladin has conducted background checks for the credentials and ethics that are documented in its Registry research reports.

Paladin provides free information services to investors who rely on planners and investment advisors to help them achieve their financial goals. Paladin is the only SEC registered firm that vets, validates, and documents the quality of financial professionals and firms (since 2003).

Click Here to view Paladin’s research report for this professional or firm.